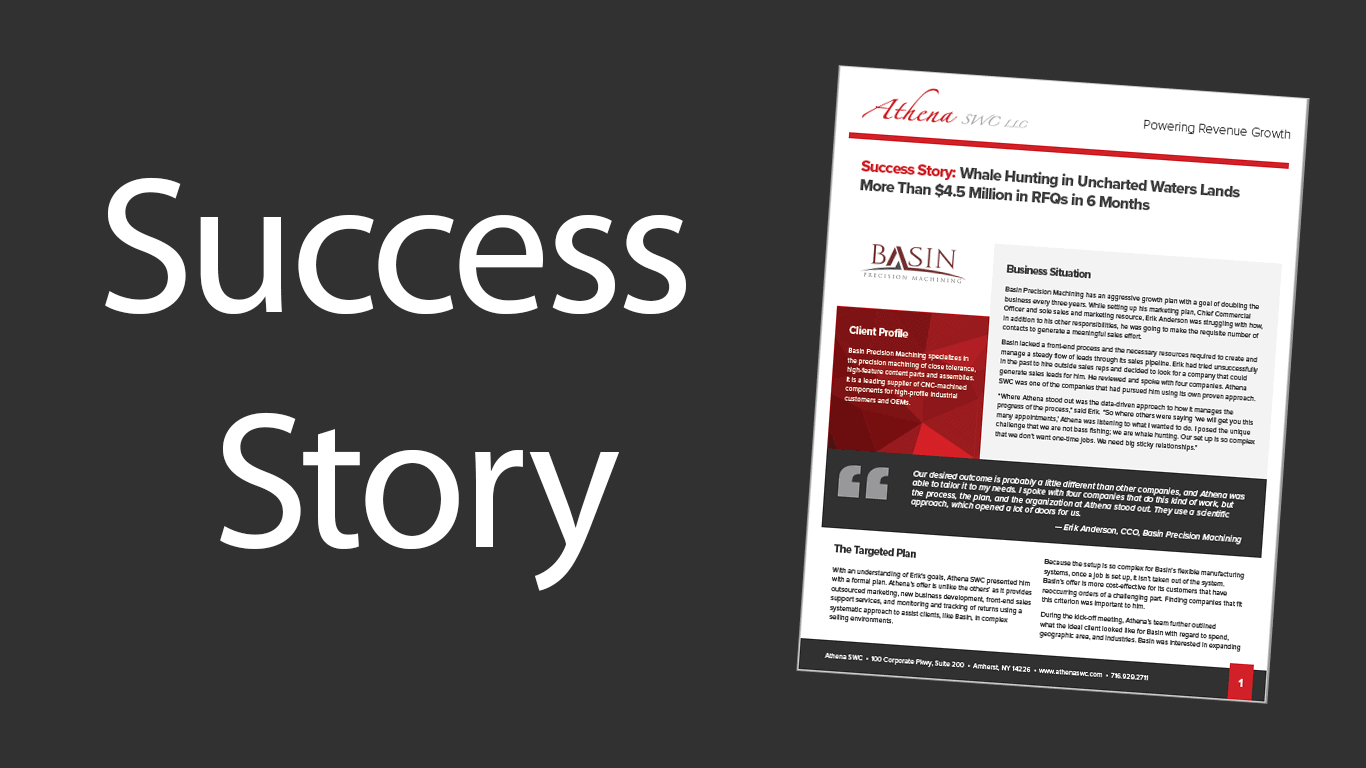 Client Profile
Basin Precision Machining specializes in the precision machining of close tolerance, high-feature content parts and assemblies. It is a leading supplier of CNC-machined components for high-profile industrial customers and OEMs.

Business Situation
Basin Precision Machining has an aggressive growth plan with a goal of doubling the business every three years. While setting up his marketing plan, Chief Commercial Officer and sole sales and marketing resource, Erik Anderson was struggling with how, in addition to his other responsibilities, he was going to make the requisite number of contacts to generate a meaningful sales effort.

Basin lacked a front-end process and the necessary resources required to create and manage a steady flow of leads through its sales pipeline. Erik had tried unsuccessfully in the past to hire outside sales reps and decided to look for a company that could generate sales leads for him. He reviewed and spoke with four companies. Athena SWC was one of the companies that had pursued him using its own proven approach.

“Where Athena stood out was the data-driven approach to how it manages the progress of the process,“ said Erik. “So where others were saying ‘we will get you this many appointments,’ Athena was listening to what I wanted to do. I posed the unique challenge that we are not bass fishing; we are whale hunting. Our set up is so complex that we don’t want one-time jobs. We need big sticky relationships.”

Our desired outcome is probably a little different than other companies, and Athena was able to tailor it to my needs. I spoke with four companies that do this kind of work, but the process, the plan, and the organization at Athena stood out. They use a scientific approach, which opened a lot of doors for us.

The Targeted Plan
With an understanding of Erik’s goals, Athena SWC presented him with a formal plan. Athena’s offer is unlike the others’ as it provides outsourced marketing, new business development, front-end sales support services, and monitoring and tracking of returns using a systematic approach to assist clients, like Basin, in complex selling environments.

Because the setup is so complex for Basin’s flexible manufacturing systems, once a job is set up, it isn’t taken out of the system. Basin’s offer is more cost-effective for its customers that have reoccurring orders of a challenging part. Finding companies that fit this criterion was important to him.

During the kick-off meeting, Athena’s team further outlined what the ideal client looked like for Basin with regard to spend, geographic area, and industries. Basin was interested in expanding into the A&D (aerospace and defense) markets but hadn’t had very much success up to this point. Armed with Basin’s target market profile and goals, Athena’s team was ready to go “whale hunting.”

Whale Hunting in A&D
Breaking through in the A&D can be challenging. There is a lot of upfront administrative tasks that must be done, and it often requires an invitation to bid. Athena’s approach of targeting many contacts within the company paid off particularly well with one aerospace company.

“It was a door I was knocking on for 10 years but could never find an entry point,” Erik explained. “They found it in four months. That is pretty good.”
On another project where Erik was not making progress, Athena was able to find a contact in another division that provided the paperwork to get set up as a supplier. Once that happened, the local contact expressed interest in sending work to Basin.

Erik understands the long sales cycle involved and the patience it will take to close the whales Athena is hunting. “We are doing an 18-month program, and we may not convert anything, but that is not necessarily the whole picture with what I am trying to do,” said Erik.

Filling the pipeline with large opportunities will provide Erik with the long-term growth he is seeking.

One of the tools that Athena provided to manage the flow of leads is PipeDrive CRM. PipeDrive allows Erik to have a real-time view of his pipeline to monitor and track movement to ensure nothing falls off the radar and to regularly follow up on quotes.

“Where some people fail is they get a bunch of leads from trade shows, for example, and cherry-pick a couple based on a conversation or they don’t do anything with them. We take everyone from the list that meets our criteria, put it in PipeDrive, and go at it. Athena uses its nurture process to keep in contact with those who want suppliers but don’t have a project, and if you don’t stay in front of them, they forget about you. And by staying in front of them, we have gotten several opportunities to quote.”

More than $4.5 Million in the Pipeline
In six months, Athena has contacted more than 220 companies, in some cases, with as many as 15 contacts at the companies. They have successfully secured appointments with 17 companies, six of which have submitted RFQs. The completed RFQs have totaled over $4.5 million in annual sales. 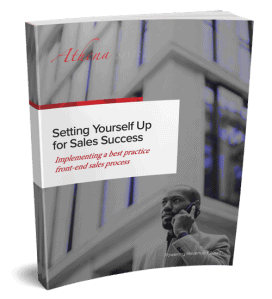